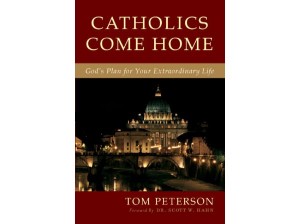 [1]God does not call the equipped, he equips those he calls.  That is, if they answer his call.  Mother Angelica used to say that any dodo will do—those not worried about their lack of ability, but willing to say yes to God. She was just such a dodo who volunteered to serve him. In spite of a childhood marred by divorce and poverty, she put her life in God’s hands and ultimately built the Eternal Word Television Network, (EWTN) which is now in 150 million television households in more than 140 countries and territories

Mother Teresa is another powerful example. She simply began picking people up off the street and taking them to a rented house to care for them.  Never could she have envisioned that it would lead to the founding of the Sisters of Charity with over 4,501 sisters active in 133 countries.

Then, there is Tom Peterson, once an advertising executive living in the fast lane – literally and figuratively. He often put the pedal to the medal to weave past mere mortals with less important lives than his. Born to a postman father and stay-at-home mom he rose up to live the good life—that is until he found something even better.

Through a life-changing spiritual experience while attending a retreat, Tom discovered that serving God brought more fulfillment and peace than worldly power or material possessions. After saying yes to whatever God had planned for him, things changed beyond his wildest imagination.  Tom became the founder and president of Catholics Come Home [2], a non-profit multimedia organization dedicated to promoting Catholic evangelization. He is also the founder of VirtueMedia [3], which offers education and hope, saving unborn babies through TV commercials offering support and education. Both endeavors began in his spare time at home. Both have impacted the world with countless saved babies and nearly a half million who have returned to the Catholic Church.

Although I began with examples of two humble religious sisters who changed the world, many might put them into a separate category. Priests and nuns do those sorts of things, you might think. But Tom is a regular guy living an everyday life. At least that’s what he did until becoming a new creation by God. “The Holy Spirit had guided me home,” he wrote in his book Catholics Come Home: God’s Extraordinary Plan for Your Life [4] “and now I felt like I need to respond out of love and gratitude by helping other souls on their journey home.”

Tom began saying a prayer: “Jesus, help me to trust in You and do Your will.”  It unleashed Divine power. Beginning by creating VirtueMedia, he worked to save babies and help mothers. It was through his work in the pro-life movement that led to him meet the Most Reverend Thomas J. Olmstead, Bishop of Phoenix who said, “It’s hard to form people in virtue, if they are not first formed in faith.”  Those words stayed with Tom and led him to take up Pope John Paul II’s challenge to bring the message of Christ to the world, especially through the modern media.

“Catholics Come Home was our answer to the Holy Father’s call,” he wrote. “We did not begin with a formal marketing plan, but we were filled with enthusiasm about bringing our Catholic faith to the widest possible audience.” Commercials had worked well for his first endeavor, so he used it again, creating ads that spotlight the history, beauty, spirituality and accomplishments of our Catholic Church. The gripping and soulful message encourages viewers to seek a personal relationship with Jesus and reminds them of His Divine Mercy.

Within the first few years of it’s founding in 1997, Church surveys in the markets where the commercials, known as evangomercials [5]TM, were run on local TV, indicated that over 350,000 souls had returned to the Catholic faith.   The Catholics Come Home® evangomercials [5]TMhave already reached an estimated 150 million viewers across North American and beyond.

In his book, Tom shares personal experiences and stories of how God can take the ordinary and make it extraordinary. He rallies the home team–the faithful– to start by simply saying yes to God and to invite others to church.

Tom commiserates that the world is hurting. “…our culture and our Church are starving for authentic Catholic heroes who will make a difference. We need saints in the world today.” And we have the raw material. ”Seventy percent of the more than 1.2 billion Catholics worldwide, many of them victims of our aggressively secular society, are no longer practicing their faith,” Tom wrote.  “They need our prayers and our help.”

Tom invites us to join his recruitment team and stay for the long haul. “Saint Paul teaches us to persevere, to keep our eyes on Christ and never lose hope, no matter how difficult or discouraging our journey may become,” he wrote.  And he urges us always to be ready to carry the good news announced by Jesus Christ to our neighbors, ‘in season and out of season” (2 Timothy 4:2).  It is something we are all called to do. Especially dodos.