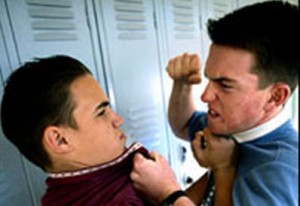 [1]If there’s one thing virtually everyone can agree on, it’s that bullying is bad.

In fact, a recent survey commissioned by Care.com [2], a caregiver referral company, revealed that bullying is the No. 1 concern of parents of school-aged children — even more so than the fear of kidnapping.

We’re all more aware of, and alarmed by, the social aggression, cruelty and violence that confront too many of our children and teens. And that’s no surprise. If you’ve ever watched a son or daughter struggle to cope with the inexplicably mean behavior of his or her peers, you know why this is such an emotionally charged issue.

In fact, in its most recent survey of American teens, the Josephson Institute of Ethics discovered that roughly 60 percent of the teens surveyed said they have been bullied at some point, while about 90 percent said they have bullied others.

To say bullying is rampant is an understatement.

You would think this is one issue that couldn’t possibly be injected with a political agenda — the safety of our children is a universal value of all parents. Alas, bullying is now a cornerstone of the gay rights agenda.

Thanks to the aggressive hijacking of the bullying crisis for political motives, the problem is only going to get worse.

Last week, students at Hartford High School in Hartford [3], Conn., made headlines by walking out of a theatrical performance called “Zanna, Don’t!” The performance was funded for presentation in the high school by Leadership Greater Hartford’s Quest program, in partnership with another nonprofit, True Colors.

The gay advocacy musical imagines a world in which heterosexuals are an oppressed minority and being straight is tantamount to social exclusion. By presenting an “opposite reality,” the play seeks to promote acceptance of LGBT students and thereby reduce bullying.

The students who walked out (media reports note they were mostly young men and largely members of the high school football team) were put off by a scene in the production that included “same-sex affection.” When two male cast members kissed onstage, audience members were said to have shouted in disgust and bolted from the auditorium.

Not exactly the reaction the school [3]’s administration hoped for.

Hartford Principal David Chambers [4] is reported to have warned the student body that the production would include such a scene. Some students asked in advance to be excused from attending the play, but Mr. Chambers said no. He also weighed, but rejected, the idea of alerting parents of the upcoming production and offering them an opportunity to excuse their children from attending.

So much for parental authority.

Despite the negative response by a large group of students and subsequent complaints from several parents, another Hartford principal, Adam Johnson, declared the production a success and was quoted as saying, “This is as important of a topic to discuss as anything in math, anything in social studies. I’m completely glad we did it.”

But the theory — that kids will cease to belittle students of nonconforming sexuality because of early sensitivity training — will only put more teens and young adults at risk of bullying, depression and suicide. Youths don’t need to be taught about sexual preference. They need to be taught right from wrong.

In addition, as this episode illustrates, those who promote the gay political agenda no longer even pretend to have regard for others with contrary religious or moral beliefs.

The knee-jerk liberal media response was to portray the students who walked out of that auditorium as homophobes, though until the public display of affection, they had not walked out.

It’s unthinkable to them that some people simply don’t want to be forced to accept gay behavior as a precondition to “tolerance.”