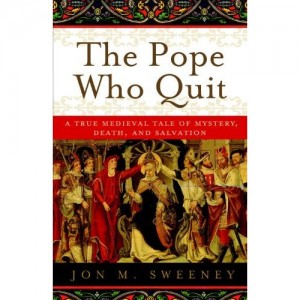 [1]The medieval times of 13th century Christendom present a world so different from our own, jam-packed with unique and intriguing characters whose stories are so little known, yet so well worth knowing. I’d recently written a biography of a man from that time called “great” in his own day, Albert the Great, a man who was placed in the heaven of Dante’s Divine Comedy, yet who was not canonized a saint until six-and-a-half centuries after his death. That’s why my interest was piqued by the story of a man of St. Albert’s time who was known as a quitter, whom Dante placed outside the gates of the Inferno, he “who through cowardice made the great refusal,” and yet, who would be canonized a saint a mere seven years after his death.

But there too was greatness in this man, Peter Morrone, who would become Pope St. Celestine V, “the pope who quit,” and Jon Sweeney, the book’s author, does a remarkable job of bringing him to life for us today. In The Pope Who Quit [2], Sweeney vividly recreates that intriguing world of 13th century Europe and the remarkable manner in which a powerful cardinal and a king brought to the chair of St. Peter a holy hermit living atop a mountain east of Rome. This book is full of intrigue, the planning and machinations of the likes of Cardinal Benedict Geatani (who would succeed Celestine as Pope Boniface VIII) and King Charles II (nephew of St. Louis IX, King of France) who would house this unlikely spiritual and temporal leader, not upon Peter’s chair in Rome, but within his own castle at Naples.

In this incredible but true tale, we see the painful and confusing results of a truly holy man, a dynamic leader in his own monastic order, as he is thrust in such an unusual manner (you’ll have to read the book for that) into the spiritual and worldly office that appears so diametrically opposed to his temperament, inclinations, and abilities. Just imagine walking into the mighty castle at Naples to see that the reclusive pope has erected within it a small hut for his own living quarters!  Much confusion reigned in the brief time of his papacy, and you will share in his struggles as Celestine V seeks a way to become Peter Morrone again, to abdicate the role of supreme pontiff, something none of his 191 predecessors had done before, and none of his 173 successors have ever done since.

The Pope Who Quit [2], while historically fascinating, is far more than a historical curiosity. It is more than one of the world’s greatest examples of “the Peter Principle,” the idea that people are promoted until they reach the position at which they are incompetent (in this case, the position being that of St. Peter himself!) The subtitle reads “A True Medieval Tale of Mystery, Death, and Salvation” and that it is.  There are lessons to be found for us today within this mysterious tale.  The holy monk himself would soon suffer a mysterious death, and not long after be recognized as a saint. As we all learn from our own mistakes, maybe we too can learn positive lessons from this man who willingly suffered humiliation and risk of bodily harm in abandoning this most holy office, when he felt this was his call from God. I think his act of “quitting” and of “cowardice,” was an act of great wisdom and courage. You’ll have to read The Pope Who Quit to inform your own opinion.

Deftly written by masterfully interweaving medieval narrative with modern parallels, The Pope Who Quit [2] will not disappoint.