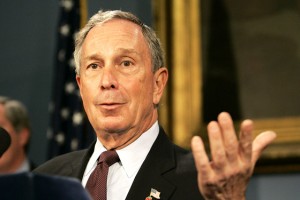 Last year, Mayor Bloomberg sought to justify his support for building a mosque near Ground Zero by recalling the bravery of the firefighters on that fateful day. “In rushing into those burning buildings, not one of them asked, ‘What God do you pray to?'” He added, “We do not honor their lives by denying the very constitutional rights they died protecting.”

The clergy gag rule is being instituted to avoid “disagreements over which religious leaders participate.” But since when has this been an issue? Plenty of clergy, including an imam, spoke at an interfaith service at Yankee Stadium after the attacks, and they managed to pull it off without a problem. Why would it be any different this time?

The difference this time is the mayor. “This cannot be political,” he intones, yet it is the politicians—not the First Responders or the clergy—whom he has invited to speak. Also, if President Obama is attending an interfaith prayer service at Washington National Cathedral on the evening of 9/11, why can’t Bloomberg allow a spot for a prayer?

Bloomberg says he doesn’t want to “take away from the solemnity, if that’s the right word, of the occasion.” Yes, that’s the right word. According to the Oxford English Dictionary, it means “having a religious character.” Yet the mayor, perversely, wants to secularize a solemn event.