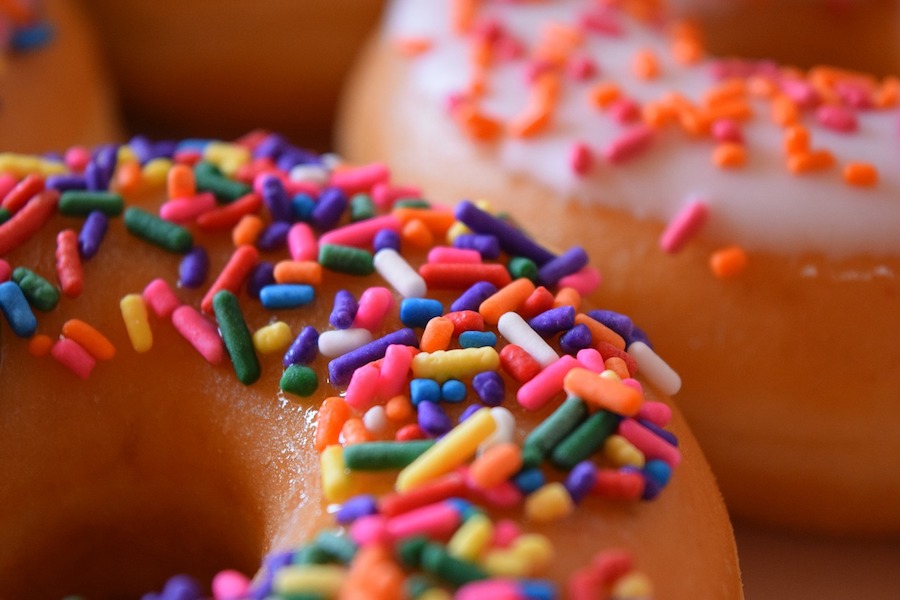 [1]What is the deal with Catholics and doughnuts? I have memories of being bribed by doughnuts through much of my young and snarky life, to either behave in or attend extra masses. My father was successful at getting all five kids to join him at daily mass in the sacred summertime with simply a nod towards Winchell’s doughnut establishment. That sweet, fried, circular vision of yumminess was all the incentive we needed to get up early for over a month.

Sacrileges? Not at all. Any good parent realizes that you can catch more kids with doughnuts than with bagels, at least here in the west. Doughnuts have been used for decades to threaten, bribe, and otherwise make an unruly kid straighten up and think twice about messing around in God’s house. I overhear parents threatening their kids when they are walking into mass, “you better behave, or no doughnuts.” Hey, I’m not pointing any fingers, I used that for years myself.

Jesus used bread to get folks to hang around and listen to the good stuff on many occasions. Fryers just hadn’t been invented yet or I’m pretty sure he would have had doughnuts here and there, to mix it up a bit. Like after the Resurrection when Peter and boys had gone fishing and caught nothing. Jesus would have captured their attention mighty fast, if they saw him walking along the shore with that bright pink box in his hands. “It’s the Lord,” and I think he has doughnuts.

I don’t know if it is just a Catholic gimmick, “hey I gotta idea of how we can get more buns in the pews.” Or, perhaps a Christian hook or if all religions see the value in sweet endings. I suppose it’s harmless as long as we eventually grow up and out, of having to be encouraged with sugared O’s to spend time with the Lord.

We are a people who can nosh quiet happily on junk food for a long time and somehow feel satisfied. Mistaking the counterfeit for the real deal can be spiritually dangerous. No, I’m not suggesting that Catholics confuse doughnuts for the Eucharist. Gees!

In our parish we are undergoing renovations to the sanctuary. Additions include a life-sized Crucifix where there was once a Risen Jesus, and moving the Tabernacle from a side location “among the people” to its new home central to our worship, behind the altar.

Don’t worry, Jesus has a new gig hovering over the Baptismal Font.

Our recently appointed Pastor explained in great detail the catechetical reasons for the proposed changes back in January. He might have had less kickback had he suggested that a Ferris wheel be brought into the worship space. The emails and comments he received were truly unchristian and really unkind. I have to wonder how someone can come to mass, even with the hope of doughnuts after, and have such cruel and heartless words to say. As expected, our numbers are decreasing, because that is how American Catholics show their disproval; in the plate, and in the pew.

Some have shared with me their feelings of our church “going backward” or that they are “not being fed.”

It’s not, to the first, and impossible to the second! And I’m not talking about the doughnuts! Jesus shows up 100% of the time.

What I believe part of the problem may be, is a lack of good formation and the ability to recognize what is really happening at every mass. The critical nature of entering into the timeless beauty, where heaven meets earth, despite whether we like or dislike the music, the sermon, pews, parishioners, or the priest. I wrote an article [2] a few years back about lost opportunities in the homily for catechesis and formation. When did it stop being about the Lord and all about us?

When we grow up eating a lot of doughnuts we can get confused about the importance of the Real Presence versus presents. One might get us in the door, but it is the other where we encounter the Lord and He doesn’t come dressed in sprinkles. Plain, simple, and pure love for the receiving. An unquenchable, insatiable, desire fulfilled at every mass if we have our appetites and minds focused on the Real deal.

One round circle can change our lives, transform our hearts, and make us new. The other circle just makes us fat.