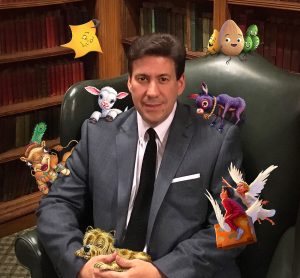 [1]During adoration, Anthony DeStefano picked up the Bible and read the parable about the grain of wheat that falls to the ground and must die before it grows. It is about letting go of fear and trusting God to do great things for our life. But first, we must surrender and give control to God.

On the drive home, the idea to write the story from the perspective of the seed hit Anthony like a bolt of lightning. Imagine being taken from a cozy warm drawer and placed into the ground, he thought. It’s not the sort of thing most people ever think of, but Stefano  can think like a child. Thus, he can relate to them, creating fun, relatable stories in Dr. Seuss-like verse with life-changing messages.

From reading that parable came, The Seed Who Was Afraid to be Planted [2]. It is a beautifully illustrated children’s book that imparts the lesson that no matter how small or scared we may be, God has plans for us more magnificent than we can imagine

It is book #20 for the best-selling author of both adult and children’s books. In addition to writing books and flying his own vintage, 1957 Cessna L19-E Bird-Dog, DeStefano is a member of the Board of Directors of Priests for Life and Rachel’s Vineyard. He has also been an EWTN television host and appeared on many national television and radio programs. His first book, “A Travel Guide to Heaven, (2003) has been published in 15 languages and 20 different countries. Another book for adults, Hell: A Guide, will be out in June.

Up until now, DeStefano’s has published with large secular publishers but has felt a stirring to directly address the Catholic market.  “From theological point of view, my sense that my Church is in trouble,” he said in an interview. “I had a conviction that I should focus on a specific Catholic audience—not that my books are so important. —instead of focusing on general market where I’ve had a lot of success. That combined with meeting Charlie McKinney, [publisher of Sophia Institute Press]  who is a really cool, straight shooter, is why I turned to a Catholic publisher.  He has two more children’s books planned with Sophia: Our Lady’s Wardrobe in April and The Grumpy Old Ox, next Christmas.

DeStefano’s previous stories, which reflect Godly values and insights, have attracted readers across denominational lines and even no denominations. He hopes that readers will follow him over to the Catholic market. The Seed Who was Afraid to be Planted, he explained, is a message that applies to everyone.

“I believe the biggest problem that people face—not just children—is fear,” DeStefano said.  “Unless we help children deal with their fears, it can manifest into much bigger problems that could last a lifetime.”

It is a message that relates to Christ himself, according to DeStefano. “Jesus is the best example of the seed who was planted. He suffered in Garden of Gethsemane and died and was buried in the earth. It was the worst evil that ever took place in the world: the murder of God by his own creatures But three days later, the resurrection represents the greatest good that could ever happen. The gates of heaven were thrown open and all of us can receive everlasting life. If God can take the worst thing and pull out the best thing, he can pull good out of our life”

Imparting such a vision can transform a child’s whole life, DeStefano said. “It can help prepare children to understand other deeper truths—including the love God has for us, the beauty of creation, the temporary nature of bodily death, the meaning of resurrection, and the joy of Heaven.”

Everyone has the ability to say no to God’s grace, he said, so planting the message to trust in God is important, but it might take time to take root. Seeds take time to grow, but we see in the book that the tree becomes a beautiful source of nourishment for other creatures.

“That’s what you become when you surrender to God, “ DeStefano said. “You become a source of life and nourishment to those around you. “