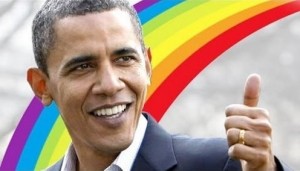 [1]Newsweek magazine is so proud of Obama’s self-described “evolution” on the issue of same-sex marriage that it has anointed him “America’s First Gay President.”

America’s voters, at least those in key swing states, seem much less impressed. As I told friends at the Canadian March for Life, which took place in Ottawa last week, Barry’s latest flip-flop will almost certainly cost him North Carolina, Indiana, and my home state of Virginia. Other states, like Ohio, Florida and Pennsylvania, are now in play as well. If these go for Romney, then Obama’s endorsement of same-sex marriage will have cost him the election.

If this particular evolution does result in the President’s political extinction, it may strike some as a kind of poetic justice. After all, the behavior that he is endorsing is an evolutionary dead end. I mean this in the literal, Biology 101 sense.

Leave aside questions of morality for the moment. Leave aside the question of whether homosexual acts dramatically shorten one’s lifespan because of the diseases that attend the homosexual act. (Even homosexual activists admit that this is so; they just quibble about the exact number of years that exposure to the blood and fecal matter of multiple partners shortens your lifespan.)

What I mean by evolutionary dead end is that each and every homosexual coupling is, by definition, sterile. No matter how many times they copulate, homosexual couplings — whether male on male, or female on female — cannot generate new life. Do not hold your breath waiting for Barney Frank to send out a birth announcement.

Homosexual activists say that the ability to procreate is unimportant. They likewise deny that an important function of marriage is to promote responsible childbearing and child-rearing. From an evolutionary point of view, however, such objections are complete, utter nonsense. 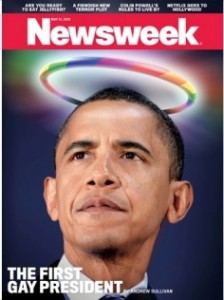 [2]To illustrate this, let us do a simple thought experiment. Let us imagine that Obama’s embrace of homosexual marriage is wildly successful. So successful, in fact, that by the end of his second term, heterosexual marriage has fallen into desuetude, and everyone in America has entered into a homosexual union. (I know how unpleasant a prospect this may seem to some, but bear with me for a moment).

So what happens to the United States then? The first thing that would happen is that the birth rate would drop to effectively zero (not exactly zero because I assume that some few lesbians would continue to artificially inseminate themselves). Then the population of the United States would begin to die off, rapidly. By the end of the century, nearly every single American would be dead.

Population control enthusiasts have long promoted homosexuality precisely because they understand its inherent sterility. This is why Frederick S. Jaffe, for example, in his October 1970 article in Perspectives, suggested that one way to reduce the American birth rate would be to encourage homosexual behavior. Jaffe understood that gay and lesbian sex was barren.

But the population bomb has fizzled, and the recession has driven birth rates in the U.S. below replacement.

The only future a family — or a nation — has is its children. America will only continue to thrive if each generation replaces itself. The American experiment in self-government will fail without people, who are, after all, its first prerequisite.

To the extent that Obama succeeds in promoting same-sex marriage, even fewer babies will be.