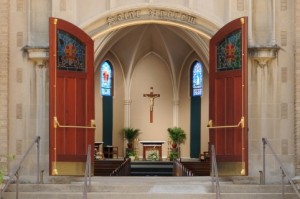 [1]For generations it’s been easy to live as a Christian in America. We have lived in a culture that largely assumed and supported Christianity or at least Christian moral principles. Even the Deists among our Founding Fathers operated within the structural framework and assumptions that undergird Christianity.

Over the past few decades, we have seen those assumptions questioned, derided, and mocked by our pop culture, media, and even our courts. What’s next for the American Christian?

While American culture is increasingly hostile towards traditional Christians, it is not quite correct yet to call ourselves a post-Christian society. The vast majority of Americans [2] consider themselves at least nominally (in name) Christian, but it is safe to say that America as a whole has largely abandoned a traditional, convicted Christianity.

Consider Justice Kennedy’s take on identity in the recent Obergefell decision: “The Constitution promises liberty to all within its reach, a liberty that includes certain specific rights that allow persons, within a lawful realm, to define and express their identity.” Kennedy’s understanding of American freedom is that it includes at its core the definition and expression of individual identity.

One can hardly imagine a sharper contrast to this characterization of freedom than the Christian idea of denying one’s sinful nature and sacrificing oneself in an effort to pursue the example of Christ. Sadly, Kennedy’s emphasis on self-defined identity (as opposed to Christ-defined) is gaining popularity in America.

Most American Christians do not know much about the history or core tenets of their faith, and furthermore have no interest in gaining that knowledge in order to defend it. We are often simply more comfortable allowing our Christianity to be a vague concept of niceness and an easy ticket to heaven, requiring little to nothing of the believer.

Many modern American Christians are better categorized as adherents to moralistic therapeutic deism [3] – looking for meaning not in the death and resurrection of Christ for our sins but in the warm embrace of some great senile benevolence [4] in the sky.

Given the increasing American antagonism towards traditional Christianity, our next twenty years will likely see a more obvious separation between the nominally Christian and the convicted creedal Christian. Nominal Christians will likely become less convicted then ever, ready to dismiss any part of the Bible in order to fall in line with the thinking of the masses. Convicted Christians, on the other hand, will be forced to embrace more tightly and more publicly the truths of Christianity in the face of the culture that rejects them.

In a recent article [5] in The Atlantic, prominent Southern Baptist theologian Russell D. Moore provides a provocative take on our changing culture. When confronted with the question of whether Christianity is dying, Moore responds, “Behind that question is an assumption that Christianity is a sub-culture of American life…. I think what is dying is cultural, nominal Christianity, and I don’t think we should panic about that. I think we should see that as an act of God’s grace.”

Moore points to a positive result of a worrying cultural shift. A shift that has led other conservative Christians like Rod Dreher to call for a type of retreat from society. Dreher’s still-developing concept of a “Benedictine Option [6]” is an attempt to utilize some of the themes of monasticism to protect and preserve Christian communities in the West. But this construction can be interpreted as an “opt-out” from culture, which is clearly against our Biblical duties:

You are the light of the world. A city set on a hill cannot be hidden. Nor do people light a lamp and put it under a basket, but on a stand, and it gives light to all in the house. In the same way, let your light shine before others, so that[a] they may see your good works and give glory to your Father who is in heaven.”
-Matthew 5:14-16

A duty to strengthen Christian communities does not lead us away from engaging in culture. Christians have an obligation to be a light to the world around us. Forsaking that obligation goes directly against the gospel, and neglects the reality of Christ’s reign:

“For he must reign until he has put all his enemies under his feet. The last enemy to be destroyed is death.”
-1 Corinthians 15:25-26

An approach to our culture that reflects Christ’s reign will be far more transformative and bring more people to Christ than an approach that places an emphasis on America’s ever-shrinking “moral common ground”. There is a 2000 year precedence for Christians being seen as foolish in the eyes of their surrounding culture, we can take it.

This is not to say that arguments from natural law or common moral assumptions have no place in our cultural dialogue, but merely that a reliance solely upon Christian moral principles without any reference to the Christian faith will not be effective in a culture that is actively undermining Christianity.

Our faith ought not to be something we keep in the closet, embarrassed to bring out into public light. If forced to choose, Christians should happily lose their cultural esteem rather than cast aside their faith.

So what do people like Dreher get right? In the next twenty years, convicted Christians will need to focus on developing strong religious communities, not necessarily defined by geography but by committed relationships. The next generation will need to be far more conscious of the ways in which they differ from the society around them. Christians can no longer assume (if they ever could) that their children will learn the principles of their faith from a tacitly Christian culture.

While in one sense this change may be tragic, in another it may prove to be a good development for American Christianity. The ubiquity of nominal Christianity has allowed Christians to avoid dealing with incompatible cultural trends. A newly self-conscious, convicted Christianity requires a daily examination of the assumptions of the culture around us.

There is much hope in this change. This may produce a stronger, if smaller, Christian community. And throughout the Bible we see how powerfully God chooses to use small communities.

So what does the convicted Christian do individually? Embrace Christ first and foremost, prior to any political or cultural commitments. Be willing to look like a fool in the eyes of the world. Work to preserve and pass on Christian community. And love your neighbors, your God, and His Word.