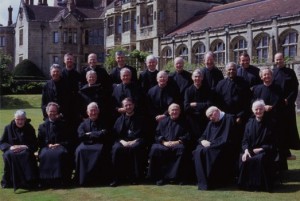 [1]Most Catholics are familiar with the three vows taken by most religious of poverty, chastity and obedience. To these three, St. Benedict (whose feast we celebrated July 11), added a fourth for the Benedictine order, the vow of stability. Our summer seminarian who had considered joining the Benedictines at one time spoke to us today after Mass about this vow of stability and I have taken his observations and adopted them here.

Stability for Benedictines involves the promise to remain and live out the rest of one’s life in the monastery community which they enter, not moving about from monastery to monastery, or place to place. One Benedictine community describes its vow this way:

We vow to remain all our life with our local community. We live together, pray together, work together, relax together. We give up the temptation to move from place to place in search of an ideal situation. Ultimately there is no escape from oneself, and the idea that things would be better someplace else is usually an illusion. And when interpersonal conflicts arise, we have a great incentive to work things out and restore peace. This means learning the practices of love: acknowledging one’s own offensive behavior, giving up one’s preferences, forgiving. [Source [2]].

It is a very profound insight to describe our constant search for a more ideal situation as a temptation and an illusion.

Instability is pandemic in our culture and it has harmed our families, our communities, our parishes, and likely our nation. Almost no one stays anywhere for long. The idea of a “hometown” is more of an abstraction or a mere euphemism for the “town of ones birth.”

The layers of extended family that once existed were stripped away by the migration to the suburbs and the seeming desire to get as far apart from each other as possible. Old city neighborhoods that for generations nourished ethnic groups and identities emptied out, and now, most neighborhoods, city or suburban, are filled with people who barely know each other and who seldom stay long in one place anyway.

The economy both feeds and reflects this instability. Gone are the days when most people worked for the same company or even in the same career all their lives. Accepting a new job or promotion often means moving to a new city. Businesses often relocate to whole new areas of the country. Lasting professional relationships are threadbare as well as long-standing relationships between businesses and customers, tradesmen and clients. The American scene and culture has become largely ephemeral (i.e. passing and trendy).

And in our private lives too we reinforce this attitude:

1. Marriages – Spiritually everyone who enters into a marriage takes a vow of stability to be true and faithful to his or her spouse in good times and bad, in sickness and health, in riches or in poverty till death. And yet more than half of marriages fail to realize this vow. Many want their marriage to be ideal and if there is any ordeal, most want a new deal. Frankly, most who divorce and remarry  are the most likely to divorce again. As the Benedictine statement above says, Ultimately there is no escape from oneself, and the idea that things would be better someplace else is usually an illusion.

2. People do this with faith too, often moving from faith to faith, or at least from parish to parish in search of a more perfect experience of church. And while some are actually following a path deeper into and toward the truth, most who church-hop are looking for that illusive community where the sermons are all good, the people friendly, the moral teachings affirm them, and the liturgy perfectly executed according to their liking. It is a kind of “designer church” phenomenon. And yet again, the problem is often as much within as without: Ultimately there is no escape from oneself, and the idea that things would be better someplace else is usually an illusion.

3. The older practice of buying a home, settling in a neighborhood and living your whole life there is largely gone too. Most people own several homes in a lifetime and thus live in several different neighborhoods as they move about. Never mind that this means a lot of uprooting and harm to relationships. People who are just passing through and waiting to find a better home are thus less committed to improving their communities, schools, and churches. Children too have relationships with schoolmates and neighbor friends severed by all this mobility. There may at times be a real need for a larger home or a safer neighborhood, but even without these needs, most seem to have the goal to “upgrade” and the emphasis seems more on the bigger house than real relationships.

4. A strange phenomenon to me personally is how popular the idea of moving to Florida or to the South is among retirees. In so doing they usually leave behind all their friends, much of their family, their church, and all that is familiar. Why is this so popular,  and does it also bespeak a kind of great divorce where family and obligations to friends and communities are seen more as burdens and part of the work that one retires from?

Well, you get the point. We have very little stability and it effects how well we can hand on the faith, and transform our culture. Our lack of stability is not wholly our fault but we do cooperate to some extent with its contours.

In the Gospel for this coming Sunday, Jesus counsels: Wherever you enter a house, stay there until you leave. In other words, settle down and don’t go from house to house looking for a better deal or a better meal. Pick a house and stay there, set down roots in the community where you minister, eat what is set before you and develop the deep relationships that are necessary for evangelization and the proclamation of the Gospel.

Stability, though difficult to find in our times, is very important to cultivate wherever possible and to the extent possible. In particular, the gift to seek is the kind of stability that is content with what God has given and is not always restlessly seeking a more ideal setting. For again, as we have noted: Ultimately there is no escape from oneself, and the idea that things would be better someplace else is usually an illusion.

Perhaps a parable to end: Sometimes there would be a rush of noisy visitors and the Silence of the monastery would be shattered. This would upset the monks; but not the Master, who seemed just as content with the noise as with the Silence. To his protesting disciples he said one day, “Silence is not the absence of sound, but the absence of self.”

Stability, an oft neglected virtue, and one to cultivate.

Here’s a video that depicts the sad dislocation that often results from economic downturns and changing technologies:

This article [3] originally appeared on Msgr. Charles Pope’s website at the Archdiocese of Washingtion, and is reprinted with the permission of the author.