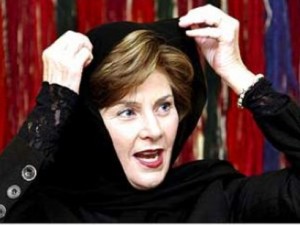 Say that you get a tempting offer from a Nigerian prince and decide to invest some money in helping him transfer his vast fortune from Burkina Faso or Dubai over to the bank across the street. The seemingly simple task of bringing over the 18 million dollars left to him by his father hits some snags which require you to put in more and more of your own money. Eventually you have invested more than you ever would have ever done up front just trying to protect the money that you already sank into Prince Hussein Ngobo’s scheme. And to protect your self-esteem, you go on believing that no matter what Prince Ngobo does, he is credible and sincere. Any failings in the interaction are either your fault or the fault of some third party. Anyone who tells you otherwise must be a Ngobophobe.

That is where Western elites find themselves now. They invested heavily in the illusion of a compatible Islamic civilization. Those investments, whether in Islamic immigration, Islamic democracy, or peace with Islam have turned toxic, but dropping those investments is as out of the question as writing off Prince Ngobo as a con artist and walking away feeling like a fool.

Western elites, who fancy themselves more intelligent and more enlightened than the wise men and prophets of every religion, and who base their entire right to rule on that intelligence and enlightenment, are not in the habit of admitting that they have been played for fools.

The Arab Springers who predicted that the Muslim uprisings would bring a new age of secularism, freedom, and an end to the violence between Islam and the West are busy writing up new checks.

It’s not insanity; it’s the term that rhymes with a certain river in Egypt. The Brotherhood’s victory discredited the Arab Spring, which discredits the bid for Arab Democracy, which discredits the compatibility of Islam and the folks on Fifth Avenue. Follow the river back along its course and suddenly the Clash of Civilizations becomes an undeniable fact. It’s easier to give up and let the river of denial carry you further along until, five years from now, you find yourself explaining why Al-Qaeda ruling Libya is actually a good thing for everyone.

In 1993, Israel cut a land-for-peace deal with a greasy Egyptian bloke named Yasser Arafat. The Cairo-born Arafat would turn his gang of terrorists into a government and police force, and rule over an autonomous territory, in exchange for ending the violence. Clinton smiled beatifically as hands were shaken and a new era of peace was upon us.

The era, however, has yet to show up.

Over two decades of terrorism have not shaken the belief of the American or Israeli establishments in the “Two-State Solution”, which has solved absolutely nothing, except perhaps the problem of how to make the Middle East into an even worse place. As the violence increased and the pathways to peace decreased, American Presidents and Israeli Prime Ministers redoubled their concession offers and their faith in the Two-State Solution—now an article of faith in most circles. Denial isn’t just a river in Egypt; it also laps at the shores of Tel Aviv, flows out to the English coast, and floods cities across Europe.

Ask a Eurocrat for the time of day and he’ll calculate how much to charge you for the subsidies to the artisanal clock farmers that it will take to answer that question. Ask him about Islamic integration and he will instantly tell you that everything is going smoothly and the problems only exist in the minds of a few bigots and the pages of a few sensationalized tabloids.

Muslim integration into Europe is going swimmingly, much like the Israeli-Palestinian peace process and the Arab Spring. It’s going like a house on fire, not to mention a bus, a lot of cars and two towers on fire — on the other side of the Atlantic. Whatever problems there are, as with the peace process and the spring process, are undoubtedly the fault of someone who isn’t a Muslim.

Give the poor dears some weapons, a country, a ballot box, free and open elections, and they’ll be less likely to blow themselves up while seeking 72 virgins on the downtown express.
Instead, empowering people who were violent while disempowered only made them more violent.

Some of the best minds in two hemispheres are engaged in seeking a solution to this paradox, which isn’t a paradox at all but rather a straight-line projection.

If Abdul is beheading people when all he has to work with is a sword, then, if you give him a gun, he will start shooting them instead. If he’s blowing up buses when he only has a terrorist group, he will blow up countries when he has a country.

The liberal projection that “Abdul + Power + Money + Bigger Guns = Peace” made as much sense as Prince Ngobo’s story about his transfer fees being cursed by witches, but, as the song goes, “You gotta have faith.” Some of the things that we have faith in are bigger than us and some are just us. Those who put their faith in Prince Ngobo and in the benign nature of Islam are really putting their faith in their own instincts, trusting that they are right, even while looking into the eye of the wrongness.

We rarely know a thing for what it is. For the most part we know it only for what we want it to be. Our knowledge of the world is inseparable from our worldview which casts the shadows that project our inner world on the outer world. The only way to avoid that trap is by studying consequences, by creating theories based on actual events, rather than manufacturing events based on theories.

Most people project their own desires and motivations on to others. Americans assumed that Muslims just wanted democracy, free enterprise, and apple pie. Muslims assume that Americans are conspiring to destroy them through a byzantine series of plots and conspiracies, because that is what they would do in our place… and that is what they are trying to do.

The Eurocrats assume that Muslims wanted to be good multicultural socialists, because that is what they want them to be. They assumed that the Arab Spring was the equivalent of Europe’s own socialist  movements, after having wrongly assumed the same thing about Arab Socialist movements generations earlier. They assumed those things, because just like Prince Ngobo’s business partners trying to figure out how to call up Lagos, they saw in the Other the mirror of their own desires.

The sunk cost of the free world into the illusion that Islam is benign, that it is a positive influence, and that it can be coexisted with is enormous. The cultural cost is even greater.

The mechanism of denial is that sunk cost. That faith which our political, cultural, and academic superiors have in themselves — in their probity, their insight and their rational tools of scientific governance. Muslims dare not question Islam because they fear Allah. Liberals dare not question Islam because they fear being fools. If they were completely wrong about Islam, then what else were they also wrong about? Pull at one thread and the whole coat of dreams dissolves leaving behind a very naked emperor.

The longer the fraud goes on, the more impossible it is for them to admit that they were wrong. What could have been tossed out after a year is an article of faith after twenty and undeniable after forty. To admit that you made a mistake right away is bearable, but to admit that your policy for generations has been senseless madness is inconceivable.

Most insidiously, the left likes the imaginary world that it has created. The multicultural utopia with jolly Pakistanis adding spice to London, Saudis putting up little mosques on the Canadian prairie, and sassy Shiites bringing diversity to Dearborn, isn’t just propaganda — it’s the imaginary world that they want to live in. The new world order that they have imagined of a friendly multicultural democracy is their idea of the world as it should be — a utopia created and maintained at our expense, and in the face of all reality and reason.

The illusion of Islam has, like the banking system, become too big to fail. It cannot fail because it would take too much else down with it, leaving behind a harder world. No matter how unintegrated Muslims in Europe are, the Eurocrats must insist that, aside from a few exploding bumps in the road, everything is going according to plan. Any day now a lesbian Imam will be preaching the virtues of secularism in Finsbury Park. It must be that way because the alternative is unthinkable.

In Israel, the Two-State Solution must still be the solution, because the alternative is eternal conflict. In the rest of the region, Arab Democracy must be viable, because otherwise there is nothing left but despair over an irredeemable barbarism.

We gotta have faith, not in any deity, including the chief deity of Islam, but in our leaders. Muslims believe that Allah is infallible, while we are expected to believe that the politicians and professors, the diplomats and journalists, are. That they are right, even when the continuing violence proves that they are wrong.

The people who shape our half of the world have fallen for the Nigerian Prince scam of Islam, and they need to believe that they know what they are doing, and they need us to believe it too. And when the check from Lagos doesn’t clear, when the bombs go off, the cars burn, the children are murdered in schools, and the rockets fly, then they don’t blame Prince Hussein Ngobo, the car bombers, terrorists, and throatslitters — they blame us for ruining the illusion by not believing in it too.

It would have all worked if only we had been as willing to be lied to as our gullible masters.