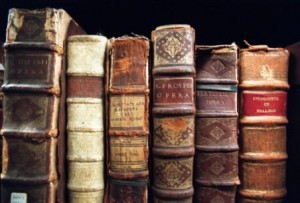 As I slowly reread The Confessions, savoring every jot and tittle, I am struck by the intensity of Saint Augustine’s search for truth—rather, for the Truth. Aurelius Augustine embraced many falsehoods during his life, but every successive identity he assumed took him one step closer to the Eternal Logos, the Supreme Reason, who is “full of grace and truth” (John 1:14).

This search began at age nineteen with Cicero’s Hortensius and culminated in Christian baptism at age thirty-three, on Easter Vigil of 387 anno Domini, after fourteen years of grueling study. However, it cannot rightly be said to have ended when he emerged from those life-giving waters, naked and regenerated, shivering before his beloved Ambrose. No, Augustine pursued the Truth to the end, even studying the Psalms on his deathbed, diligently seeking after the wisdom of God.

Such commitment to knowledge is difficult to understand these days. We live in a shallow society that values flippancy more than erudition and irony more than intellect. The younger generations may believe in lowercase truths, truths that are contingent and relative, but as for uppercase Truth . . . not so much.

It is startling to think that people once held so highly the discernment of reality: what is and what is not; why we exist and how we are to live. These matters are today relegated to college philosophy courses and other areas of academia’s ivory tower. And even for professional seekers, wisdom is rarely “panted after,” to use Augustine’s splendid term. Philosophy is seen as a game.

This is because philosophy which does not terminate in theology is worthless. Truth cannot be decoupled from God, and the hunt for the former inevitably leads to the latter, as Augustine discovered.  Thus the prophet David sang, “O send out Your light and Your truth: let them lead me; let them bring me unto Your holy hill, and to Your tabernacles” (Psalm 43:3). Reality is given objective stability only when situated under the gaze of the Supreme Subject, the Infinite and Eternal Being whom we call God (a small and utterly insufficient word).

Given the late decline of Christianity, it is no wonder westerners are increasingly skeptical of claims to ultimate truth. People are not wrong in assuming that such certainty is impossible apart from Divine revelation.  “Because that, when they knew God, they glorified Him not as God, neither were thankful; but became vain in their imaginations, and their foolish heart was darkened” (Romans 1:21). The human intellect is weak and fickle, prone to error and oversight, liable to see patterns in chaos and overlook that which does not accord with preconceived notions. Left to our own devices, we would remain trapped in delusion.

“For the Lord gives wisdom: out of His mouth comes knowledge and understanding” (Proverbs 2:6). Wisdom is not something we create but something we discover by the grace of God. Every truth is a glimmer of the Logos. Without reference to the Supreme Truth, all lesser truths appear random and disconnected. Without God, “in whom are hid all the treasures of wisdom and knowledge” (Colossians 2:3), there is naught but chance and illusion.

Man, a mere creature, has never possessed the mind of God. “He has made everything beautiful in His time: also He has set the world in their heart, so that no man can find out the work that God makes from the beginning to the end” (Ecclesiastes 3:11). Nonetheless, there were days when we could proudly and confidently assert that our civilization and its rich deposit of knowledge were rooted in the Triune Deity’s transcendent reality. But they are gone. No longer can we call upon the Eternal Reason to bear witness “so that he who blesses himself in the land shall bless himself by the God of truth, and he who takes an oath in the land shall swear by the God of truth” (Isaiah 65:16).

Now we stand beside Pontius Pilate, the cynical pagan, the calculating animal, cold blood in our veins, and sneer with contempt, “What is truth” (John 18:38).