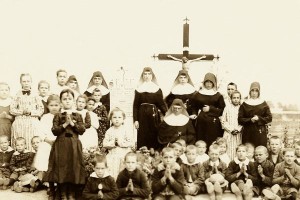 On October 9, 1859, the life of a Belgian immigrant named Adele Brise was forever changed. It was on that day she received her third apparition of the Blessed Mother, who identified herself as the Queen of Heaven. Our Lady’s specific request of Adele was to pray for the conversion of sinners, offer her Holy Communion for the conversion of sinners, make a general confession and to gather the children, teaching them what they needed to know for salvation.

On December 8, 2010, 151 years later, Bishop David Ricken released a statement declaring with moral certainty, the apparitions and locutions received by Adele Brise were worthy of belief, although not obligatory among the Christian faithful. Why is it that Our Lady’s message has taken center-stage now, after 150+ years of having a quiet, humble following? At Champion, the sun did not spin (as happened at Fatima) and no miraculous spring was found (as at Lourdes). The appearance of Mary to Adele was not extravagant but was simple; it was to encourage Adele in her faith and to respond to a call of catechesis. So what does a message meant for a Belgian immigrant in 1859 mean for us today? One would only need to look around to find the answer.

Statistics indicate for most of the Catholic faithful weekly participation at Mass is not a priority. CARA suggests that 23% of all Catholics attend Mass on a weekly basis while only 17% of those born after 1981 attend Mass weekly. [1] CARA also indicates “About one in eight Catholics (12 percent), participate in Reconciliation once a year and an identical proportion do so several times a year. Two percent report that they participate in Reconciliation at least once a month.” [2] From this, we can conclude the engagement of the Church’s sacramental life on the part of the Catholic faithful is lacking.

In addition to the decline of Catholics practicing their faith, every person is immersed in a culture where sin is readily accepted, including abortion, contraception, pornography, homosexuality, etc. As a nation we can still need to listen to and heed Our Lady’s message. Given the need for our society’s conversion, the reemergence and public spotlight placed on the Shrine of Our Lady of Good Help 150+ years following the apparition calls us to realize the need for our personal conversion and reliance on the sacraments.

The Message and Mission for the New Evangelization

Our Lady told Adele she was the Queen of Heaven who prayed for the conversion of sinners and that she wished for her to do the same. On the morning of October 9, 1859, Adele Brise had attended Sunday morning Mass with her sister and a local neighbor woman. [3] Our Lady affirmed her reception of the Eucharist but told her to do more, she had to make a general confession and offer her communion for the conversion of sinners. Following this, Our Lady exhorted Adele to gather the young children and teach them their catechism, how to make the Sign of the Cross, and what they needed to know for salvation.

The message which called Adele to a life of prayer became the basis of the ministry she was to undertake. She rooted herself in the Eucharist and unveiled herself in the Sacrament of Penance. Before she could begin the mission, she had to have an inner conversion in order to effectively bring others to that point of conversion called for by the Blessed Mother. Paul VI said “modern man listens more willingly to witnesses than to teachers, and if he does listen to teachers, it is because they are witnesses”. [4] Adele became a witness by the life she led.

Through the foundation of a tertiary order, her life became a life of availability for all people. When she died on July 5th, 1896, it was only a few years later that the tertiaries disbanded. Unlike Bernadette Soubirous or Lucia dos Santos, Adele was not called to a contemplative life within a cloister, but to an active life in the Church. She was to be a contemplative in action. As a result, the tertiary order supplied Adele with the maximum capacity to fulfill her mission, by dedicating her entire life to this calling.

After rooting herself in prayer and drawing closer to the Eucharistic and forgiving Lord, Adele was then able to carry out her mission, to teach the young people. Adele’s life of prayer and action stands as a witness to the Church today. She is indeed a model for the New Evangelization. By looking at how Adele lived and responded to the call of Our Lady to bring souls to Christ, we in turn are entrusted with the same mission. Despite the demise of the tertiary order, the mission has been entrusted to the Church at large.

Pope Paul VI first wrote about the need for a New Evangelization in Evangelii Nuntiandi and John Paul II wrote about it extensively throughout his papacy. In their writings, both popes describe today’s society as being marked by: an age of defiance to Church authority, a decline in the sacramental life of the Church (especially in Mass attendance and Reconciliation), a breakdown in the family, secularization, and atheism. [5] Noticing these problems, John Paul II wrote his first encyclical Redemptor Hominis calling mankind to rediscover its Redeemer.

John Paul II would develop his vision of the New Evangelization over the course of his pontificate. The hallmark of his program for the New Evangelization is quite simple: man needs to encounter the Lord in both Word and Sacrament. By drawing near to Scripture, the Mass, and the Sacrament of Penance, one is given the necessary grace to persevere in the spiritual and moral life. Under the papacy of Benedict XVI the Church continues to call her faithful people to evangelization.

In September, 2010, Benedict XVI initiated the Pontifical Council for promoting the New Evangelization through his motu proprio, Ubicumque Et Semper. Pope Benedict realized the need for catechesis and evangelization was still prevalent and like his predecessors, he continues to make evangelization a priority. The Pontifical Council encourages the use of the Catechism of the Catholic Church and is exploring new ways of evangelizing in the third millennium. [6] With the convocation of the Synod for the New Evangelization on October 7, 2012, the Church continues to understand how it can relay the faith to the next generation.

We can learn from Adele Brise and the message she received from the Queen Heaven. The message and mission Adele Brise received in 1859 proposes to the Church a program for the New Evangelization. It was a program effective 150 years ago and can still be effective today. The New Evangelization does not necessarily call us to have better materials or to reach out in new and different ways. [7] Rather, one needs to return to the source of all life–the same wellspring which Adele drew from—the Sacraments of Eucharist and Penance coupled with personal prayer. Catechists first need to be formed in the spiritual life so they truly believe what they confess before being able to relay the faith to others. Re-echoing Paul VI, they must first be witnesses of the Christian life before they can be teachers. If we are not living a joy-filled life as Christians, marked by our prayer, who is going to want to learn about or imitate what forms our way of life.

Taking Our Lady’s Message to Heart

Everybody is busy no matter what their vocation in life is. In the midst of our daily schedule, it might be difficult for us to pause for quiet prayer and reflection. At times scheduled events on Sundays, like a child’s soccer game, calls a person to realize their priorities and to find time at some point to participate in the Sunday Eucharist. It is at moments such like this that we are being called to fidelity to Our Lady’s message, of prioritizing our celebration of the sacraments. By making sacrifices to attend the Mass, you will be teaching your family about the importance of the sacraments and how they are the foundation of the Christian life.

Secondly, to fully respond to Our Lady’s call, does not mean you have to go and sign up to teach catechism classes, but if you feel that is one way you could respond, then please do. Remember the message and mission was twofold—prayer and catechesis—contemplative and active. Be sure to take moments to pray each day and pray for the conversion of yourself and for those around you. In this way you will be heeding Our Lady’s request to pray for the conversion of sinners. Lastly, teach others by your life. At the end of Mass the deacon (or priest) can dismiss the people with several options, two of which reflect this: “Go in peace, glorifying the Lord by your life” and “Go and announce the gospel of the Lord.”

The Church in her great wisdom sends us forth, knowing the Eucharist has shaped and formed us, and now commissions us to share the good news. This is what Adele Brise did in her life and we can do so by sharing the faith with all we meet, simply by living our Christian values. On this anniversary of Our Lady’s apparition to Adele Brise, may we come to a better understanding of how to live Our Lady’s message in the age of the New Evangelization.

[3] It is interesting to note the historical record does not say she was accompanied by her parents. Given the liturgical timeframe, Saturday anticipatory Masses were not the norm and fasting before Mass was required. As a result, either Lambert or Catherine Brise attended Mass earlier in the morning, or they had fallen victim to the lackadaisical practice of the faith that prompted Our Lady’s message to Adele.

[7] An article from America Magazine recently focused on this question, specifically the necessity of memorization in religious education as a foundation from which prayer then would subsequently follow. See: David Impastato, “Faith by Heart,” America Magazine, September 10, 2012, accessed online (October 7, 2012), http://www.americamagazine.org/content/article.cfm?article_id=13564